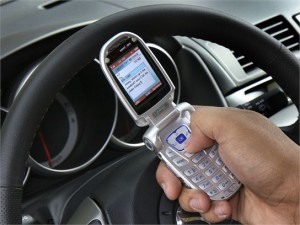 Despite increasing media attention and laws forbidding the practice, more Americans than ever are using their cellphones to talk and send text messages while driving, a new study shows.

According to the research, nearly 70 percent of Americans ages 18 to 64 said they had chatted on their phones while driving in the past 30 days, and about 30 percent said they had sent text messages while behind the wheel. Drivers in seven European countries were also included in the study, and the numbers showed that the practice appears to be far more common in the United States than overseas.

In Britain, where laws against cellphone use while driving are strict, drivers were the least likely to use their phones on the road. Only 21 percent admitted to having talked on a cellphone while driving. The figure was below 50 percent in every other European country included in the study except Portugal, where it was around 60 percent.

The findings, published in the latest Morbidity and Mortality Weekly Report, showed that for many Americans, using cellphones on the road is a matter of habit. While 69 percent of people said they had done it at least once in the past month, about 30 percent reported that they did it regularly or fairly often.

At least 10 states have laws that forbid drivers to use hand-held cellphones, and 39 states prohibit texting while driving. But despite widespread publicity and a growing number of laws targeting distracted drivers, the new study shows a rate of cellphone use on the road that is higher than the rates found in several reports published in previous years, said Ileana Arias, the principal deputy director for the Centers for Disease Control and Prevention.

“The problem is unfortunately not improving over time,” she said. “If anything, it seems to be getting worse.”

Dr. Arias said it was unclear why there appears to be so little progress. One possibility is that people are becoming more reliant on and attached to their cellphones and hand-held devices, making them less likely to shut them off or ignore them when they get behind the wheel. The numbers may also reflect a need to create stricter policies that are implemented more widely and vigilantly enforced, like drunken-driving laws, Dr. Arias said.

That may also explain the disparities among countries. In the United States, laws restricting cellphones on the road vary widely from one state and municipality to the next, whereas many European countries have adopted nationwide laws.

“Our numbers are significantly higher than in the seven countries,” Dr. Arias said. “It’s not clear whether that’s because of a difference in policy and enforcement or whether it’s just a cultural issue where people think very differently about their safety and their behavior behind the wheel.”

Either way, the new numbers paint a sobering picture, and the C.D.C. is taking the issue seriously, Dr. Arias said.

“We’re very adamant that people make their cars a no-cellphone zone,” she said. “If you’re in the car, turn it off, don’t answer it, don’t read it, and if you have to, pull over. It only takes a split second for people to encounter a life-changing or even fatal event on the road.”

Reposted from the New York Times.