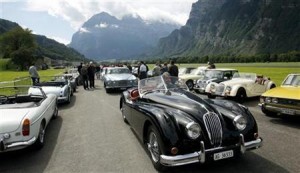 Dennis Varni remembers buying his first car, a 1931 Ford Model A, more than a half century ago when he was 14. It cost him $45 and to amass that princely sum, he picked fruit, hawked his model train set and even sold the clothes off his back.

Now 67 and retired from owning several successful businesses, Varni no longer sweats scrimping and saving to buy motor vehicles. In fact, his collection of 65 cars and 13 motorcycles, valued at $10 million, has bolstered his bottom line at a heart-racing pace.

“I remember a time when the stock market died, about 10 years ago, and I said, ‘That’s it,'” recalls Varni, who lives in Monte Cerino, California. Instead of tech stocks, T-notes or traditional investments, he sunk $850,000 in an ultra-rare 1955 Jaguar D type, a machine known to make Ferraris eat dust. That car’s worth today? Likely in excess of $4 million, Varni estimates.

“It’s done better than the market,” he says, “and I’ll tell you what, I haven’t hurt my kids’ inheritance.”

During the last year, more and more collectors like Varni have looked to flashy cars, vintage wines and precious gems as true investments and significant sources of value in today’s shaky economic climate rather than just collectible commodities.

Granted, not all of that buying is going towards equity-like investing: The wealthy have always had their personal reasons for acquiring the art and ephemera that attract them the most.

“With Treasury securities being downgraded, gold at an all-time high, and commodities and farmland values surging, people are increasingly eyeing fine art, snapping up bargains where they can find them, given expectations of continuing price increases,” Tom Livergood, the chief executive officer of the Family Wealth Alliance, says in a new study by ACE Private Risk Services called “Passionate Investing on the Rise.”

The ACE report contains some surprising survey findings about how much return on investment matters to serious collectors. Wealthy people cited investment value (74 percent) just below the top reason for collecting, which is enjoying the intrinsic value or beauty of the items (90 percent).

“Collecting is becoming increasingly an enhanced and important component of people’s attempts to diversify their financial holdings,” says Gary Raphael, a senior vice president at ACE and director of its national risk consulting program. “It’s not just the aesthetics of your collection, but the return on investment.”

Collecting valuables can get unpredictable as a financial venture, and it’s easy to get burned when you don’t know the turf and aren’t in the game for the long haul. George Gruhn of Gruhn Guitars in Nashville, Tennessee is considered the world’s foremost expert on vintage guitar appraisal – in part reflecting his rigorous scientific training as a zoologist – and divides the market into three categories of people: speculators who see prices rise and try to jump in for a quick profit, true collectors who operate out of passion to collect and utility users, who actually use the expensive products they buy.

Gruhn says those speculator types would have done well a few years ago with vintage electric guitars of the type made by Fender, Gibson and Rickenbacker when the market escalated rapidly from 2002 to mid-2007 – at the peak, $250,000 for a late 1950s Gibson Les Paul was not uncommon. But they would have then suffered a very significant correction from 2008 through 2009. “It was much like the Roadrunner cartoons, where the speculator compares to the coyote running out on thin air,” Gruhn says.

The true collectors who stay in the game for the long haul, Gruhn says, are likely to do better financially. “I don’t view the guitar market as any less stable than the market for real estate, art, gold or other commodities,” he adds.

Still, high-value items have significant carrying costs, meaning that you don’t buy an expensive race car or guitar without paying to keep it in tip-top shape. What’s more, collections of significance require special blanket- and itemized-insurance policies like the type ACE provides.

“Theft is an issue, and an accelerating issue, but a lot of loss activity occurs everyday that has very little to do with someone trying to break in to your property,” Raphael says. “If you have a toilet overflow, for example, how could that damage an item in the collection?”

Collectibles “are quasi-assets, that’s the best way to put it,” says Martim de Arantes Oliveira, West Coast regional director for Silver Bridge, a wealth management firm based in Berkeley, California. Oliveira points out that thanks to the Internet and globalization, the speed of transactions and quality of pricing information have increased, making many categories of collectibles easier to buy and sell.

“Since the market for these items has grown, and is more efficient than in the past, the liquidity has increased,” he says. “It isn’t in any way close to what you would see in financial markets, but relative to the liquidity you would’ve seen 20 or even 10 years ago, it’s much increased.”

This is linked in large part to the psychology of passionate investing. Current economic uncertainty “has put us in uncharted waters, so people want to have holdings that they can see, touch, store and are tangible,” Oliveira says.

That may explain why a recent auction of John Wayne memorabilia fetched an astounding $5.38 million. The two-day event, held by Heritage Auctions in October, saw one bidder take home the green wool beret Wayne wore in “The Green Berets” for $179,250 (equal to 3 percent of the 1968 film’s entire budget). Wayne’s last California driver’s license fetched $90,000, enough to buy a brand new Porsche 911 and still have change left over for a year’s worth of gas.