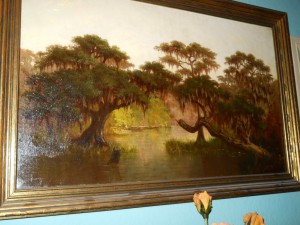 David J. Goldberg, the New Orleans appraiser who has gained a reputation for uncovering valuable oil paintings, recently helped a Louisiana family realize $300,000 for a regional oil painting with a $75 original price tag on the rear!

The painting, by William H. Buck, a prominent 19th Century painter of Louisiana landscapes, was identified when Goldberg was called in to evaluate an aged parent’s art collection for insurance purposes.

“Sometimes, families who fail to call in for advice from a knowledgeable and honest appraiser never realize that they are in possession of a valuable work of art. That’s exactly what happened with this Tchefuncte River William H. Buck.”

Fortunately, in this case, Goldberg was called in for an insurance appraisal. “Can you imagine if they had sold the painting to some ‘generous’ person who offered them $25,000, for example”. The family would have been a quarter of a million dollar poorer!

The William H. Buck painting is a regional painting from the third quarter of the 19th century, when the introduction of photography and a poor economic climate contributed to the diminished prominence of portraits. Artists like William H. Buck turned to the landscape for worthy subject matter. In essence, Buck created a catalog of oil paintings of Louisiana bayous and countryside. In the case of this work, it depicts the area on the northern side of Lake Pontchartrain along the Tchefuncte River.

Born in Norway, Buck settled in New Orleans around 1860. His works are in the collections of the New Orleans Museum of Art, the Historic New Orleans Collection, and the Ogden Museum of Southern Art. They are also in the Stark Museum of Art, Orange, Texas and the Washington Country Museum of Fine Art in Hagerstown, Md.

After identifying the valuable oil painting, Goldberg was able to tap a network of professionals, one of whom knew the largest private collector in Louisiana for works by William H. Buck. Within weeks, the two collaborated and the painting passed from the estate to the collector for $300,000.

In 2010, David J. Goldberg identified an Albert Bierstadt painting entitled “Above the Timberline” that the owner thought was worth $2,000. Goldberg estimated the fair market value at more than $100,000. The Bierstadt eventually sold at auction for that owner in excess of that amount.