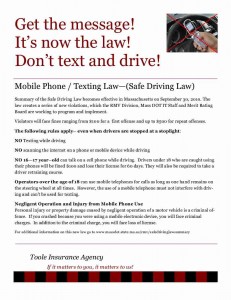 A new Massachusetts law took effect yesterday banning text messaging while driving. Drivers under the age of 18 are banned from using any type of cell phone or electronic device, including hands-free technology.

Massachusetts is the 30th state to ban texting while operating a motor vehicle.

The law, passed by the state Legislature and approved by Gov. Deval L. Patrick earlier this year, prohibits “use of a mobile telephone, or any handheld device capable of accessing the Internet, to manually compose, send or read an electronic message while operating a motor vehicle.”

“Driving while texting or using a cell phone carelessly is seriously unsafe,” Gov. Patrick said in a statement. “This law means police are going to take it seriously.”

According to the Associated Press, almost 6,000 people were killed in crashes on U.S. roadways that allegedly involved phone-distracted drivers in 2009. Add that to 400 crashes in the Commonwealth during 2008.

Employee Benefits Errors… Are you Covered?