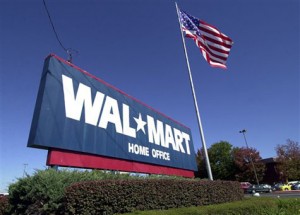 JEFFREY BROWN: And now we turn to the wider impact of today’s landmark Supreme Court ruling in the Wal-Mart workplace discrimination lawsuit with two outside experts who filed briefs in the case.

Suzette Malveaux is a professor of law at Catholic University’s Columbus School of Law. Richard Samp is with the Washington Legal Foundation, a public interest law firm.

Suzette Malveaux, I will start with you.

You wrote on behalf of the women bringing the suit. How significant was today’s ruling for them, starting with them?

SUZETTE MALVEAUX, Catholic University of America Columbus Rule of Law: This ruling was very significant. In fact, this was sort of a devastating blow, I think, to employees who are challenging systemic discrimination nationwide against an employer like Wal-Mart or of the — sort of the magnitude of an employer of that size.

And so, you know, the Supreme Court basically killed this class-action. And it is going to be very difficult now — or, certainly, there’s a higher standard for employees who are bringing these kinds of massive cases together to come together and bring those resources together and challenge nationwide discrimination in one case.

JEFFREY BROWN: All right, we will explore the class-action implications in a moment.

But, first, Richard Samp, you argued on behalf of Wal-Mart.

Why was this important to the company and to other companies?

RICHARD SAMP, Washington Legal Foundation: The reason it’s important is that today’s decision had nothing really to do with employment discrimination, and everything to do with the fairness of having class-actions that are on a nationwide basis.

Wal-Mart rightly pointed out that it wasn’t being given an opportunity to defend each of the potentially hundreds of thousands of claims of employment discrimination, but instead was having the entire case lumped into one big pot.

And what the Supreme Court said was you can’t do that. If there isn’t a single policy of nationwide discrimination, you can’t decide the case all at once based on a policy that is not there.

So, Suzette Malveaux, explain for us, then, why is bringing a case as a class-action so important? The women here still can bring their own individual cases, correct?

Now, the problem, realistically, is, for many people, they don’t have the resources to do that. They may be very skittish about challenging their employer, especially at a time like this with this economy. It takes a lot of courage, of course, to sue your employer and keep your job. You may be afraid of retaliation.

You know, if you have small claims, it may be difficult for you in fact to attract a lawyer to your case. So the class-action mechanism makes it possible for people who might not otherwise be able to bring a lawsuit at all to do so collectively. So it certainly gives them the power to do that, not to mention there really is — you can’t challenge systemic discrimination as an individual.

You could challenge your own situation that might be happening on the ground in your store, but it’s very hard to reach policies and procedures that you think are having a greater impact.

SUZETTE MALVEAUX: And so that’s really where you are going to see sort of less — less cases looking like that.

JEFFREY BROWN: Well, so, Richard Samp, that is the argument, that the Supreme Court has raised the bar so high, that individuals cannot — I mean, they can legally, but, realistically, practically, cannot sue.

RICHARD SAMP: They can’t realistically bring any more nationwide class-actions. What they can do, if they can identify a policy, for example, a store manager who discriminates against women on a storewide basis, they can bring a class-action in those circumstances.

Moreover, it’s not really true to suggest that an individual doesn’t have the economic wherewithal. They can hire an attorney on a contingency fee basis. The law provides for an award of attorneys’ fees to a prevailing plaintiff. It also provides for an award of punitive damages in cases of egregious misconduct, so that there really are employment discrimination cases…

JEFFREY BROWN: So, you are saying that a class-action is still possible. What must a complaint have to go forward, in your opinion, as a class-action?

RICHARD SAMP: It has to point to some policy that has been adopted.

All that was ever alleged here was that Wal-Mart’s policy was a failure to have a nationwide policy, to allow individual managers around the country to do as they wanted to, and therefore allowed them to discrimination. If, in fact, they did discriminate, then you can bring a class-action within that region or within that store where the manager is.

JEFFREY BROWN: So, Suzette Malveaux, does that leave room for either the women we’re talking about at Wal-Mart or at — at — anyone, at other companies that want to bring class-action suits?

SUZETTE MALVEAUX: Women can still challenge discrimination at Wal-Mart. I mean, I would sort of take exception to how realistic that is for many people across the country with limited resources, despite the — sort of the — what’s in the statute in terms of Title VII.

So, you can do that, but I think it does — I think the court’s ruling is kind of extraordinary, because it raised the bar and said you have to have significant proof that there is this policy of discrimination. And up to this point, it has been adequate to say that excessive subjectivity is, in fact, a policy. It’s a policy of discrimination, it’s a practice, that it’s the glue that sort of keeps all of these women together and holds this together as a case.

And the court has said today that that’s not good enough, that it’s not good enough to have a — sort of to challenge excessive subjectivity that comes out of headquarters. And so, certainly, you know, a minority of the justices, four of the justices, disagreed with that determination and felt that, in fact, that is a policy, and that policy should be protected and should be permitted to go forward for a class-action.

JEFFREY BROWN: Well, Richard Samp, how wide-ranging is this? I mean, this was — corporate America was watching very carefully. So, are we talking about beyond other employment cases? Are we talking about product liability, securities, et cetera, antitrust?

RICHARD SAMP: Definitely. This decision will cut back on class-actions in those areas where you really can’t point to something that the defendant did on a class-wide basis.

So, for example, in product liability suits, where somebody has been injured by a product, in general, those kinds of class-actions will not be allowed to go forward after today, because every individual plaintiff will have to show the individual circumstances of their injury and the individual damages that they suffered.

On the other hand, in some areas, like securities law, the Supreme Court in two very recent decisions has made it very clear that, because securities actions tend to take place on a market-wide basis, those are very susceptible to class-actions.

JEFFREY BROWN: Suzette Malveaux, do you see it having that wide-ranging an impact across all kinds of areas?

SUZETTE MALVEAUX: You know, it’s a little hard to tell, actually, because the case is so centered around the facts of Title VII, the Civil Rights Act of 1964, and that it’s clearly an employment discrimination case. So it’s not entirely clear.

I mean, to the extent that the court has made some broad statements about the class-action rule, then it could have a greater impact. It’s not really clear at this point. I think one of the things that’s helpful, there was a Supreme Court case recently that made it clear that, let’s say you wanted to structure another class-action. There may be a more limited class-action that is possible.

This was a far-reaching one. And so I think plaintiffs’ counsel will be thinking, you know, all over the country about how do we, in fact, bring cases that may be sort of less widespread, right? You might look at regions and say, well, we’re going to bring this case on a regional basis, maybe just California or maybe Illinois or whatever, and sort of rein it in.

So it’s not impossible, in fact, to bring this — to bring other class-actions or smaller types of cases where people can come together. So I think plaintiffs will start to look at that as a real possibility…

SUZETTE MALVEAUX: … in reaction to this case.

JEFFREY BROWN: And, briefly, Richard Samp, what will defendants’ attorneys be looking at now to plan ahead for what might be coming?

RICHARD SAMP: Well, first of all, I agree totally with that last comment, that we will see class-actions, just on a smaller basis.

I think defense attorneys, however, will be feeling armed by today’s decision to vigorously fight efforts to certify a class, that, if the plaintiff in most cases can get class certification, the feeling is the case has to settle. It generally is too big to actually go to trial. So, this becomes a much bigger battleground than before.

JEFFREY BROWN: All right, Richard Samp, Suzette Malveaux, thank you both very much.

Blades of Grass: My experience of making a DSLR Film in 48 Hours