Romance in the workplace can be a minefield 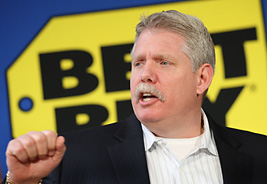 ST. PAUL, Minn. — The scandal at Best Buy raises the sticky issue of romance in the workplace, specifically relationships involving bosses and subordinates.

Such relationships can be a minefield for companies, exposing them to lawsuits, creating discontent in the workplace and costing top executives their jobs. That’s why most big companies have policies intended to police or even prohibit executives and managers from getting too close to the people working for them.

At Best Buy, at least one employee complained to the company in writing about 52-year-old CEO Brian Dunn’s relationship with a 29-year-old female employee.

Dunn left the company last month, before an internal investigation released Monday concluded he had shown extremely poor judgment and a lack of professionalism. The investigation also indicated founder and Board Chairman Dick Schulze badly bungled his handling of the situation. Schulze is losing his chairmanship as a result.

Two titans of retail laid low — not for misuse of company funds, but because of a relationship between an executive and an employee — the kind of relationship that can cause lots of trouble for a company.

“That relationship might be a friendship,” said Karen Schanfield, an employment and labor law attorney with Fredrikson & Byron in Minneapolis. “It might be more than a friendship. It might become sexual in nature. Any of those situations is really fraught with peril for the employer.”

“Relationships often change over time,” she said. “They might start feeling total consensual in nature. The moment it is not consensual, there is risk for the employer that the relationship will be viewed as harassment, illegal harassment of some sort.”

And Schanfield says from the get-go, a subordinate might feel pressured into a relationship with a boss.

“It’s very difficult for there to be meaningful consent when there’s a differential in power,” she said.

It can cost companies hundreds of thousands of dollars to defend a sexual harassment lawsuit and there’s the potential for hefty awards for damages, as well as the public spectacle and the possibility of discontent among workers who perceive someone’s getting favored treatment.

To defend the company, employers enact ethics policies that discourage even consensual connections and romances between employees of different ranks.

“They’re in place to save money for the employer in the long run, to avoid litigation, costly settlements and legal fees,” said John Klassen, a Minneapolis employment attorney.

Klassen said when a high-ranking manager is having an improper relationship with an employee, the law can interpret the situation as the company itself harassing the victim.

Employees don’t have a legal obligation to report inappropriate relationships or other ethics violations, but most big companies encourage internal reporting of such allegations.

A company in Oregon called EthicsPoint helps employers collect complaints. Best Buy is among the thousands of companies that use the service, which includes telephone hotlines, web-based reporting and case management.

EthicsPoint will not disclose if it received complaints about Dunn, but says overall about 30,000 concerns, questions and complaints come in from workers at the various employers every month.

Internal investigations are far preferable for a company than having an employee turn first to an attorney or a government whistleblower hotline in hopes of collecting a reward for reporting wrongdoing.

Legal experts say companies have to consistently and fairly enforce an ethics policy for it to be effective and gain the confidence of employees.

But Tanick said companies typically are not concerned about blocking consensual relationships among most rank-and-file employees. That could be because it would be too difficult to monitor all those relationships, good or bad. It could also be because they have much less potential to become legal liabilities for a company.