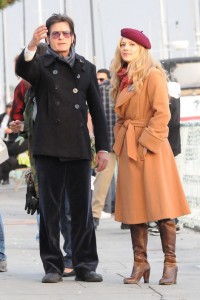 Director Roman Coppola wasn’t able to land insurance for his new movie A Glimpse Inside The Mind Of Charles Swan III after casting formerly embattled star Charlie Sheen as his lead.

Sheen was fired from TV sitcom Two and a Half Men in March 2011, following a much-publicized breakdown which began when he trashed a hotel room in New York.

After losing his job on the sitcom, Sheen fell into a downward spiral and spent several weeks making bizarre public appearances before hitting the road on an ill-advised comedy tour.

As a result, financial backers were hesitant to support Coppola’s upcoming comedy with Sheen onboard, but the director refused to let that stop him from hiring his pal, who he met on the set of his father Francis Ford Coppola’s movie Apocalypse Now in 1979.

He tells Details magazine, “A friendship with someone at 12 is an enduring thing. Still, it took some time for him to commit to me during all that public stuff. I just hung in there and kept, you know, not letting him off the hook, frankly. A lot of people didn’t think I was making a good judgment. But when he said, ‘I will be there for you,’ that was all I needed.”

Sheen has since turned his life around, and Coppola is glad he didn’t listen to critics.

He adds, “We weren’t able to insure or bond the film and some other problems, but I just wouldn’t let them stop me. And I’m so grateful, because he gave a really nuanced performance. He’s charismatic and comes through with wit, charm, and depth of feeling.”