Putting the ‘Insurance’ Back in Health Insurance 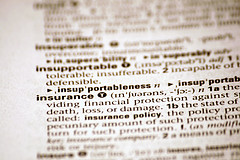 The point of insurance, of course, is to pool the risks of a group of people as a mechanism for protecting against uncertain financial loss. If 100 people pool their risks together and the home of one of them burns down costing $100,000, each person ends up paying around $1,000: a hundred thousand divided by 100, plus the overhead costs associated with administering the scheme.

But there’s a twist. Let’s say one of the homeowners lives in a neighborhood where the frequency of arson is high. Let’s say another homeowner lives in an arson-free neighborhood, with a fire station next door. Should these two homeowners pay the same $1,000 for their insurance? The second homeowner would call that a bad deal for him, and would ordinarily refuse to participate, unless the insurance premiums were adjusted so that he paid less, while the first homeowner paid more.

Adverse selection is a serious problem. According to the U.S. Census, 55 percent of Americans without health insurance are under the age of 35. 72 percent are under the age of 45. It’s these generally healthy people, in the first halves of their lives, who elect to go without insurance, because it is far too expensive, relative to their current health status. Older Americans are much more likely to be insured, because they get a great deal: the cost of their insurance is heavily subsidized by the young.

Thanks to a number of unwise policies adopted by state and federal governments in the United States, adverse selection is a huge problem in American health insurance. Let’s go through these policies.

Community rating. Community rating provisions prevent insurers from varying premiums on the basis of a policyholder’s age, gender, or health status. For example, Massachusetts in 1996 enacted a law requiring that insurers charge their oldest customers only 2 times what they charge their youngest ones. Obamacare imposes a similar 3:1 rating band based on age, and prohibits insurers charging different rates based on health status.

The problem is that the oldest individuals in the private market (those younger than 65), on average, spend six times as much on health care as the youngest ones do (those older than 18). Hence, 3:1 community rating forces the youngest people to pay 75 percent more for insurance, so that oldest people can pay 13 percent less. 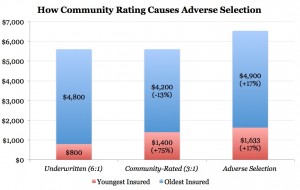 Above is a simplified illustration of how community rating causes adverse selection. In the first bar, there is a classically underwritten distribution of insurance costs: the 18-year-old pays $800 in premiums, and the 64-year-old pays $4,800: six times as much. Then, in the second bar, 3-to-1 community rating is imposed, which redistributes the cost of premiums. Now, 18-year-olds must pay $1,400 for insurance—a 75 percent increase—so that 64-year-olds can pay 13 percent less.

When a young person’s average annual health expenditures are $700 a year, and he is asked to pay $800 a year for insurance, it’s a reasonable deal. But when that same person is asked to pay $1,400 a year for his $700-a-year expenditures, it’s an unreasonable deal. You can’t blame young people for balking at that offer. If 50 percent of the young people drop out of the insurance pool, but all of the older people stay in, you get the third bar, in which adverse selection drives up—by 17 percent—the average premium costs for the people remaining in the insurance pool.

What’s telling in the above illustration is that, after adverse selection, the oldest policyholder ends up paying more than he would have under free-market underwriting: $4,900 instead of $4,800. A government policy aimed at forcing young people to subsidize premiums for the elderly ends up driving up costs for everybody.

Guaranteed issue. For the same reason, forcing insurers to cover everyone with pre-existing conditions drives premiums upward. If you know you can buy insurance after you’re sick, you have every incentive to drop out of the system now, and wait until you’re sick to buy insurance.

Benefit mandates. Coverage mandates also create adverse selection. For example, some states force all plans in a state to cover acupuncturists and chiropractors. Others force insurers to cover substance abuse treatment and smoking cessation programs. Lobbyists convince state legislatures to adopt these mandates, in order to enrich their service-providing clients. If you’re a drug addict, it’s a great deal. If you’re not, it’s another reason for you not to bother buying insurance.

The typical benefit mandate adds 4 percent to the cost of an insurance plan. According to a study by Victoria Bunce of the Council for Affordable Health Insurance, 106 new insurance mandates were enacted by the states in 2011. Rhode Island and Virginia lead the nation with 70 mandates each, as of 2011. Idaho and Alabama are last, with 13 and 19 mandates, respectively.

Other benefit mandates are financial, such as Obamacare’s requirement that all plans sold on the new exchanges have a “minimum actuarial value” of 60 percent. This means that insurers must cover more of your care, which means that premiums need to be higher. Young, healthy people have little interest in such plans. 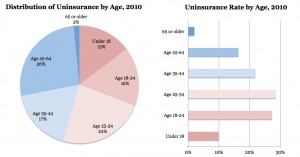 Contractual breakdown. An underappreciated issue that drives adverse selection is that of contractual breakdown. Under Obamacare, policyholders are able to terminate their insurance coverage at any time. But insurers are forced to honor their policies if their beneficiaries get sick. As Richard Epstein puts it,

“The least risky individuals, therefore, have every incentive to get out of the system, which is regrettably accommodated by the [Affordable Care Act] rules that allow people to terminate coverage unilaterally at any time for any reason. A sounder system would have allowed health-insurance carriers to require the insureds to pay a penalty to withdraw from coverage, or to insist that they remain in the plan for some minimum period.

What phone companies can routinely do is thus systematically denied to health-insurance carriers.”

Again, if insurers can’t count on policyholders to stay on their plans for the length of their contracts, insurers have to charge more money to make up for the fraction of people who game the system by dropping out.

In addition, carriers have no incentive to enter into long-term contracts with beneficiaries. When it comes to health care, long-term policies would do much to improve the system.

Let’s say you buy a health insurance policy that lasts for five years, which neither side can unilaterally terminate. That’s a system that is common in Switzerland. There, contracts are signed for one to five years, and can’t be broken unless you leave the country.

Under a five-year contract, the insurer has a much greater incentive to make sure you stay healthy, because it will be more liable for the bills if your health deteriorates. One-year contracts, on the other hand, incentivize an insurer to simply hope that you don’t get sick, with little eye to the long term.

“Why don’t you get rewarded [for healthy behavior, in the U.S. system]? So here’s a Swiss health policy, a five-year policy, they measure your health in the beginning of the five years, they predict how healthy you will be five years from now. You have to stay with them for five years, because they’re going to make you healthy. They’re going to help you get healthy. And they want you to be around with them when you’re finally healthy. Here’s the deal: at the end of the five years, if you’re as healthy as they predicted, or healthier, they give you half your money back.”

Because Americans don’t buy insurance for themselves, they have no incentive to buy plans like these.

What can be done?

Reforming the system involves, first and foremost, encouraging people to buy insurance for themselves, by eliminating the tax-code discrimination against individually purchase health insurance. Second, people should be able to buy insurance across state lines. When individuals are buying their own policies, they will vote with their feet for policies that have fewer mandates and fewer problems with adverse selection. Third, we should eliminate federal mandates that drive up insurance costs, especially in the individual market.

One possible reform is to encourage more innovation with guaranteed-renewable insurance, such that a person who buys insurance for one year is contractually guaranteed the opportunity to renew that policy at previously-agreed-to rates. The existing forms of guaranteed-renewable coverage tend to increase up-front costs in exchange for lower costs on the back end, which can still cause adverse selection. The goal would be to preserve the incentives for people to buy insurance in the first place, and encourage long-term encourage contracts.

Free markets continually make all sorts of goods cheaper and more plentiful. Some cling to the belief that this can’t be achieved with health insurance. But it can.

Romance in the workplace can be a minefield