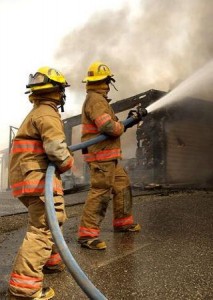 Dry conditions and high winds in New Jersey helped increase the size of a wildfire in Burlington County that has now burned more than 1,000 acres since starting Monday morning, reports the Star-Ledger.

The fire is now 75 percent contained and fire officials expect to fully contain the fire by the end of the week, according to the newspaper. About 25 homes were threatened by the fire, but no reports of property damage have occurred.
The National Weather Service (NWS) continues to have a red flag warning in effect for the entire state of New Jersey, noting a high wildfire risk.

Weather conditions also resulted in several other small wildfires across the state, including a 300 acre wildfire in Burlington County, although firefighters were able to quickly squelch many of the fires before they began to spread, reports the newspaper.

In addition, small fires have also been burning in New York, including a five-alarm brush fire has been burning a former landfill on Staten Island, reports The New York Times. A fire also broke out on Long Island on Monday, which has consumed more than 300 acres but is now under control, reports the newspaper.

In an effort to prepare and reduce wildfire risks in New Jersey, the Insurance Institute for Business & Home Safety (IBHS) and the International Association of Fire Chief (IAFC) have partnered to bring the Ready, Set, Go! Program to the state in the near future.

Cyber & Data Security: Protecting your business against an invisible enemy!