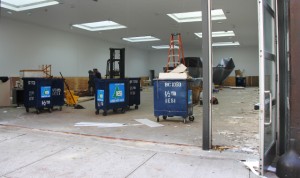 NEW YORK — All across Chelsea last week, gallery employees lugged artwork out of flooded basements, laid canvases across tabletops, and tried to determine how much inventory could be salvaged from the devastating flood that ravaged the neighborhood. Asked if they had insurance, almost every dealer replied, “Yes, of course.” But for what, exactly, are they insured?

In the wake of Hurricane Sandy, the prosaic issue of insurance has taken center stage as galleries (and private collectors) begin recovery. While no amount of money can revive a waterlogged drawing, dealers are relying on insurers to provide a much-needed cushion while their storefronts are out of commission. For some, however, the cushion offered by insurance might not be enough.

“Thousands of artworks have been affected,” said Christiane Fischer, CEO of AXA Art Insurance, during a recent conference call with journalists. The morning after Hurricane Sandy hit, Fischer and her team set out to visit 300 clients located in high-risk areas like Chelsea and Lower Manhattan. By Saturday, they’d visited about 210 sites, the vast majority of which were galleries, and delivered damaged artwork to storage spaces for inspection. “There, we do triage — we try to figure out what can be conserved and what is a total loss,” Fischer said. She expects to begin sending checks to dealers this week.

CRACKS IN THE SYSTEM

But the problem doesn’t end there. While most galleries carry some form of fine art insurance, many are underinsured. “There may be a situation where the total value of art destroyed is more than the value of the art insured,” Fischer conceded. Indeed, several dealers ARTINFO spoke with said they paid between $4,000 and $6,500 per year for art insurance, which covers damage up to $850,000 and $2 million, respectively. But not every art insurer will reimburse a dealer for waterlogged inventory. Candice Madey of the Lower East Side gallery On Stellar Rays noted that her insurance company charges an additional fee for flood damage to artwork — the basic plan doesn’t cover it, nor do many other companies she consulted. To make matters more difficult, her deductible is more than $10,000 in the event of a flood. “That’s quite high if the gallery were to get entirely wiped out,” she said.

Dealers who have artwork on consignment face an even trickier situation. Works of art are generally insured “for the selling price minus a certain amount, or the acquisition price plus a certain amount,” according to Fischer. But if the painting is consigned, the vast majority of that money will go to the artist. A ruined artwork originally priced at $10,000, for example, might merit $5,500 from the insurance company. If the dealer splits sales with an artist 50-50, he will likely pay the artist her full $5,000 and be left with only $500 from the insurer. As one dealer put it, “It’s not a good situation. You aren’t covered and the artwork is gone.”

If the consigned artwork can be restored and sold — even at a lower price — the gallery is in a better position. But the dealer doesn’t always determine the fate of a damaged work of art. “Often, it is the artist who decides if an artwork should be restored,” said Ellen Ewald, partner at O’Toole-Ewald Art Associates, Inc., a leading art appraisal firm. The artist and the dealer may not always see eye-to-eye on the subject. “I’ve seen some very fine pieces of sculpture, for example, where maybe a tiny element has been broken off. The artist says, ‘I want that piece destroyed, I don’t want it sold in its present condition, and I don’t think it can be restored.’”

Chelsea galleries that managed to get artwork out of harm’s way before the storm still sustained extensive damage to their physical spaces. Storage rooms have flooded, drywall has been washed away, and mold has begun to grow. But most dealers (or their landlords, if they are renting and their landlords agree to pay) will be financing reconstruction out of pocket in the wake of Hurricane Sandy. Even if dealers own commercial insurance that covers most property damage, like a broken roof, it won’t cover flooding. For that, they have to take out special insurance — and, according to Fischer, most don’t. (After a flood eight years ago, Luhring Augustine and Andrea Rosen opted to place a 5,000-gallon tank beneath the gallery space, according to Artforum, perhaps in lieu of flood insurance.)

For a high-risk area like Chelsea, flood insurance would cost dealers between $2,500 and $6,500 a year, according to Frank Ramos, an agent at Allstate who specializes such coverage. (The price is determined by the client’s proximity to a flood zone and is regulated by FEMA.) That’s a substantial fee for dealers already running on a tight budget — especially since before last year, few considered Chelsea particularly vulnerable to catastrophic weather events.

“You say to yourself, ‘The potential losses are a couple hundred thousand dollars.’ What is the price you’re willing to pay for flood insurance? For me, it wasn’t the top priority. The priority was to make sure all the artists’ work was properly insured,” said dealer Bruce Silverstein, whose 24th Street gallery was badly hit by the storm, but whose inventory survived largely unharmed. “Will I change going forward? I don’t know. It’s clear this region is susceptible, but I also know this was a unique situation. If there’s a 1/100 chance that you’re going to get flooded, you’re going to focus on protecting the artwork first. We did our best to make sure the art was properly ensured and to evacuate it before the storm hit.”

Hurricane Sandy defied even Fischer’s expectations — a woman who gauges risk for a living. “You always prepare for what you think the worst-case scenario is,” she said. “Galleries moved works to places that they thought were out of harm’s way and the water came in so much higher than anyone ever expected it would.” For both dealers and insurers, the coming months will be a time to reevaluate what is possible. Said Fischer, “When that worst-case scenario just became more extreme — an even worse-case scenario — that will influence how you do business.”